What is a hedge maze? 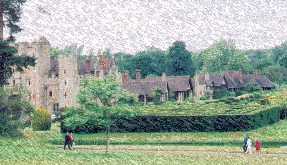 Hedge mazes are the oldest and, probably, still the most common sort of maze. They were often built in the gardens of large country houses to provide fun and entertainment for visitors and guests.

The picture at the right shows the hedge maze at Hever Castle in Kent. Click on the picture to see a larger version. Hedge mazes are difficult to photograph, especially as I do not own a helicopter!

They are constructed from a path, or paths, separated by planted hedges. The common shrubs used for the hedge are yew, cypresses, laurel and beech. The path is usually gravel. It is common to place horizontal wires or wire netting along the line of the hedge to prevent people pushing through to take a short cut. The main reason for this is not to torment those who are lost and frustrated but to prevent the hedge from being damaged. Hedges grow slowly and damage can take a long time to heal.

What is a water maze?

Water mazes can be grouped into three types. Those where the path is a conventional path but the hedge/wall is replaced with a trough of water. In this type of maze it is usually fairly easy to see across the maze and plan your route.

Secondly there are water mazes where the hedge/wall is replaced with jets of water which are difficult to see through, as well as soaking anyone who tries to jump to the next path. These mazes can have the added difficulty of the jets being turned on and off, thus changing the route to the centre. This can be changed from day to day, or even while there are visitors in the maze.

Thirdly there are those where many paths are provided but only when you take a path do you discover that a spray will wet you if you continue. This is the type of water maze at Hever Castle and shown in the pictures on the right. The upper picture shows part of the maze. The walkway is made up of number of paths shaped as con-centric rings connected by radial paths. The paths are constructed from concrete slabs supported above water on legs. The task is to get to an island in the middle. However some slabs, when stepped on, trigger a spray of water which is angled to wet the walker. This is shown in the lower picture. Click on the pictures to see larger versions.

What is a mirror maze?

Mirror mazes are constructed differently to hedge/wall mazes. Of course the walls are made of mirrors but they are not usually in straight, parallel lines. Instead they are usually arranged at 60 degrees to one another, on a triangular grid pattern. See drawing on the right to get the idea, click to make it bigger. If the mirrors are set up correctly then looking into the maze one sees a lot of pillers laid out in rows. These are the frames and supports for the mirrors. Because the mirrors are angled they are approached at an angle so you do not just walk straight towards your reflection. It can be difficult to recognise when you have returned to a place that you have passed before. A small space can accommodate quite a complicated maze and provide a real puzzle for the visitor.

What is a maize maze?

A recent trend in maze making is the Maize Maze. This is a seasonal construction when a maze is produced in a field of maize (known as corn in the USA). These mazes are usually much larger than hedge mazes and, as the idea is to harvest the crop at the end of the season, the paths take up a small part of the area and large areas of maize are left between them. They are made by planting the seed in the normal way with mechanisation and then, when the seeds have grown above the ground level, they are pulled out by hand where the paths are required. These mazes are popular in the USA but as more British farmers now grow maize they are increasing in popularity in the UK.